With incredible life ratings, all Tokistar LEDs are ideally suited for continuous operation in commercial applications. LEDs rated at 0.48 watts provide a softer lighting effect and are the most energy-efficient choice. These LEDs consume so little energy they can span much greater distances from a single feed point.

Virtual IncandescentTM LEDs do a remarkable job of emulating traditional incandescent filaments. Ultra Bright LEDs do the same, while providing a brighter light source. Both LEDs are rated at 1.8 watts. 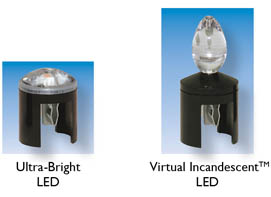 Tokistar’s Exhibitor Series was originally introduced with incandescent xenon lamps, and we still offer them as an option. Due to the efficiency and exceptional life of LED sources, xenon lamps are no longer the most popular choice.